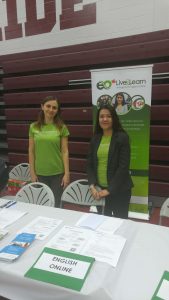 For the second consecutive year, English Online was among a dozen service providers featured in the Holiday Newcomer Event held at the Daniel McIntyre Collegiate Institute on December 10, 2017. Hosted by the Philippine Heritage Council of Manitoba Inc. and Pinays MB, the event welcomed around 600 newcomers from various countries who now call Winnipeg their new home.

Families were feted with entertainment numbers, games, food, and raffle prizes. The kids had a field day with games, face painting, glitter tattoos, and balloon animals. They also enjoyed the appearance of their favourite mascots, even Santa and an elf. One of the most-awaited parts of the event was the giveaway of blankets from the Blankets for Newcomers Drive by Pinays MB. 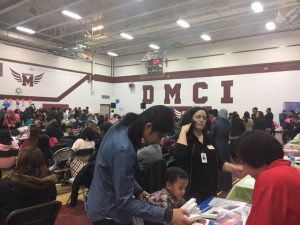 The Philippine Heritage Council of Manitoba (PHCM), Inc. is a non-profit cultural group comprised of representatives from over 35 member organizations and individuals within the Filipino-Canadian community in Winnipeg.